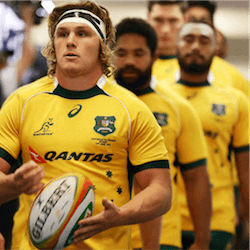 Some rugby union punters might think the Wallabies were already keen enough to prove a point at Murrayfield on Saturday afternoon, after their June loss to Scotland in Sydney and the 30-6 drubbing England handed out at Twickenham last week, but it looks like Australia just got a little angrier.

Tuesday’s training session in Edinburgh was bedevilled by the rain that’s been bucketing down in the Scottish capital for days.

When the team arrived at their designated pitch at the Peffermill sports complex, the rain had already turned the turf into what veteran Wallabies hooker Stephen Moore, set to retire after his 129th Test on Saturday, called probably one of the poorest surfaces he’d ever seen.

Worse was to come. The Aussies were then told by complex staff that they could not use the main pitch, such as it was, because it was reserved for a student match between Durham and Edinburgh Universities. That match was eventually shifted to another field entirely; another testament to the unplayability of the surface.

After training on the slippery, leaf-strewn edges of the Peffermill pitch for a while, the Wallabies were shifted again. They got to finish their drills, four days before the Test, on an artificial turf that Edinburgh University called a World Rugby approved 3G all-weather pitch.

Moore called it slippery, making it very difficult to get any traction or purchase.

In fairness to their hosts, it has to be said that Australia were offered the option of training at one of the practice pitches at Murrayfield, but they turned the offer down for fear of SRU spies.

Ranked third in World Rugby, the Wallabies are odds-on to win on Saturday, at around $0.40. Their blip against England notwithstanding, they’ve been looking like a different team to the one that lost twice to New Zealand after their Scottish defeat.

They’ve won seven Tests of 13 this year, five of them consecutively between their second loss to the All Blacks in the 2017 Rugby Championship and last week’s loss to England, with two draws against South Africa.

In a mean mood after being messed around in training, they look likely to justify the betting sites’ faith in them. Scotland are being offered at around $1.75, with a draw at $25.00.