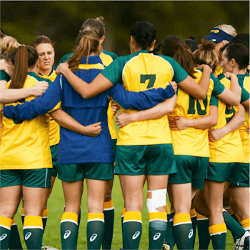 Wallaroos Clinch a Win in Auckland

The Australian woman’s rugby team, the Wallaroos have won their opening match of their New Zealand tour in Auckland. With less than a day to acclimatise to the conditions, the Australian team took to on the Auckland Storm with a total of 11 uncapped players on the field. The inexperienced side got off to a shaky start and battled with the windy conditions. After just a few minutes of play, Auckland’s Shannon Willoughby broke through the Wallaroos defence for the first try of the match.

Feeling a little shell shocked, the Australians had to regroup before hitting back with their own try by working through some quick attacking phases. With the conditions in their favour, the New Zealand team put down another two tries curtesy of Delzea Salamo-Tuua and Doris Taufateau and cruising into the lead. Through dogged determination and the refusal to give in, the Australians bounced back eventually claiming the lead with just 7 minutes of play remaining.

A superb penalty by Chloe Leaupepe in the dying minutes of the game sealed the win capping off a brilliant 13-point run for the visitors. Speaking to the press about the game, coach Paul Verrell said the team had trained really hard on their defensive structure but was caught off guard a few times. Going forward the team would need to focus on shoring up their defence and set piece.

With one win under their belt, the Wallaroos can now turn their attention to their first test against the Black Ferns on Saturday. This will be the first of two tests against the New Zealanders as part of the first woman’s curtain-raiser to the much anticipated Bledisloe Cup. The Australians, who have not played a test since 2014 will be looking to make history by defeating the New Zealand team and end their embarrassing record of 13 straight losses.

In all of the previous 13 clashes against the Kiwis, the Wallaroos have come off second best. Speaking to the press, captain Ashleigh Hewson explained that they definitely have the talent to beat the number 1 ranked side, or at least give it a good crack. With it all to play for, ruby fans, punters and sports enthusiasts will be keeping a close eye on how the game pans out.