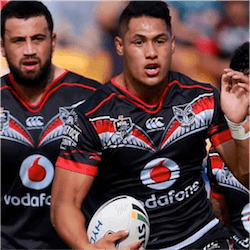 The Warriors have pulled off a gutsy victory against the Titans thanks to the efforts of Kieran Foran on his first day out. The Warriors, who were not keen on extending their losing streak, immediately felt Foran’s almost mythical presence. Foran was instrumental in setting up David Fusitua’s first-half try before scoring a vital four-pointer in the second-half himself.

The Warriors may have won the match but they certainly did it the hard way. Johnson opened the scoring early in the match but the Warriors quickly let their advantage slip. The Titans took the lead with Dale Copley and Daniel scoring two tries out wide. Fusitua managed to give the Warriors the lead back again but only for a short while. Two quick tries by Elgey put the Titans up at 22-12 at half time.

The Warriors managed to find a bit of form in the second half with Captain Roger Tuivasa-Sheck scoring a much-needed try in the opening minutes. The Warriors were able to keep their momentum, dominating possession and territory throughout the second half. But despite some inspired attacking phases, the Titan’s defence were able to hold the visitors at bay.

Kieran Foran provided the Warriors match-clinching try, diving over the line, bringing the crowd and his fellow teammates to life. This gave Johnson the crucial conversion needed to send the match into a heart-stopping showdown. All hopes were on Foran to cap off his return with perfectly timed kick. But it Hoffman who did the job for the Warriors, sealing the deal while Johnson converted for the icing on the cake taking the final score to 28-22.

Speaking to the press after the match, Tuivasa-Sheck spoke about the role Foran played in his opening game. He said that he was pleased with Foran’s contribution as a whole and the way he meshed with the side’s key players. He went on to explain that when Foran steps up, it allows the other players to run free and find other opportunities in the game.

Meanwhile Foran admitted that he was feeling the effects of not playing for such a long time. His shoulder held up well though and his hamstring felt good throughout the match. The Warrior star was feeling confident and is looking forward to next Sunday’s match against the Eels.