Will Auckland Nines Shift in 2018? 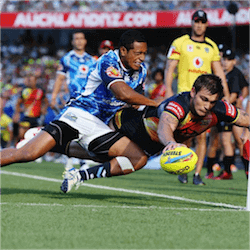 The Sydney Roosters finished at the top of the heap in the Auckland Nines at the beginning of February, beating the Penrith Panthers in the final. However, Australian rugby league sides ruled the roost throughout the tournament; hosts New Zealand Warriors lost all three of their pool matches and didn’t make it past the first round.

With 15 Australian teams making up the rest of the field, that resulted in the quarterfinals, semis and final being exclusively Australian affairs. This is one of the reasons the NRL is now considering moving the 2018 Nines tournament to an as-yet undecided Australian city.

While rugby league remains very popular in New Zealand and Australia, the crowds for the Auckland Nines have been falling off. Eden Park hosted only 22,000 people on the opening day of the tournament this year, one of the smallest crowds since the Auckland Nines began in 2014.

With the bulk of the teams, and thus the bulk of the fan base, coming from Australia, it makes sense to shift the tournament, purely from the perspective of the stadium revenue: it will make no difference to fans who follow the Nines on television or at online betting sites.

Although the NRL has a firm five-year agreement with organisers Duco Events and Auckland Tourism, 2018 is the final year of that agreement. So a shift of venue before a new agreement is negotiated could well something all parties would consider.

Competition between Cities Will Be Fierce

If the NRL does decide to move the Nines, of course, the question on everyone’s lips will be: “Where to?” Queenslanders will tell you that the Suncorp Stadium is the world’s best, but Brisbane will see fierce competition from Perth, Melbourne, Sydney or Adelaide.

Perth is seeing a resurgence in rugby league interest since the city began hosting NRL matches again in 2009, and although Adelaide, like Perth, doesn’t have a team in the Nines, there is a long and strong league tradition in South Australia. Melbourne and Sydney have plenty of teams in the competition, as well as an adequate supply of suitable stadiums.