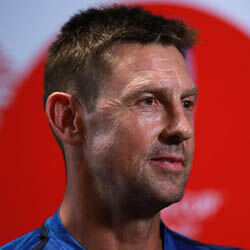 Scott Wisemantel has left England’s backroom since the World Cup and returned to his native Australia. He was a key Assistant for Eddie Jones for the past 18 months but has taken up the attack coach position back home.

Wisemantel initially joined Jones’ coaching staff in a consultant position after a discouraging Six Nations performance for the 2018 summer South African Tour. Although the English lost that series, his impact on the team’s attack was a significant one and he continued his good work through the course of 2019. Jones’ side managed to score 24 tries during the Six Nations and a further 22 during their campaign for the World Cup.

Jones has said that Rugby Australia also approached him before Rennie got appointed coach for the Wallabies, but that he didn’t consider their interest serious enough. He said that only informal contact only made and his commitment to a two-year English contract made it difficult for him to consider anything else at this point.

Jones will likely add several new coaches to his staff soon, seeing that Neal Hatley left his scrum coach role and that Steve Borthwick is prospectively joining Leicester. Matt Proudfoot, the former South African assistant who organised the flattening of England’s scrum in the World Cup Final, is rumoured to be in the running for a possible forward coach position soon. This suggests that Bothwick may be able to get out of his contract and leave for Leicester before the Six Nations.