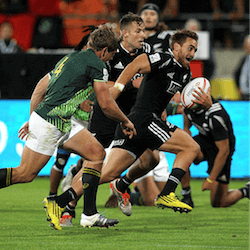 It is appropriate that the final tournament of the 2016-17 HSBC World Rugby Sevens Series will take place at Twickenham Stadium on 20-21 May. Not only is the London arena the historical home of rugby union, but at the moment it also looks like England is the only team, apart from Fiji, capable of challenging the dominance of South Africa in the competition.

Currently, the Blitzboks are 23 points ahead of any rivals on the table, with 126 points. England is second on 103 points, with Fiji snapping at their heels with 100. Behind them are New Zealand on 84 points, the USA on 67, and Australia languishing in sixth with 62.

The 2016-17 WR Sevens Series comprises 10 tournaments in total, so Australia have four more rounds left to improve their standings: in Hong Kong and Singapore in April, then Paris and London in May.

The top spot is almost certainly out of reach; even if the team were to win every game for the rest of the series, the three top teams would have to co-operate and finish in the bottom four in each of the remaining rounds to give the Aussies a shot.

However, there still might be a possibility of a fourth place, although it doesn’t look likely on the team’s record so far this season. Punters will probably get more rewarding action if they focus on the three-way battle between South Africa, England and Fiji for the top two, as well as the USA and New Zealand challenging for a final place in the top three.