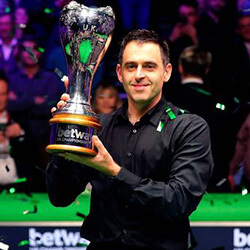 Ronnie O’Sullivan has won the UK Championship for the seventh time in his career after beating Mark Allen 10-6 in York.

O’Sullivan held on to his title to move to 19 World, UK, and Masters trophies, and surpassing Stephen Hendry’s Triple Crown events record.

Six frames in a row allowed the Englishman to dominate the game. Northern Irishman Allen managed to rally to trail 9-6, but O’Sullivan finished off the match with a break of 78, and went on to collect his £170,000 along with the trophy. O’Sullivan, who is a five-time world champion, was absent during the 2015 event, but has been dominating at the Barbican for a number of years, taking three titles since 2014. The Englishman has won 27 of his 28 matches since 2014, only losing once during his 2016 final loss while playing Mark Selby.

He was also tied with Steve Davis on six tournament wins, but this latest has finally put him past his fellow Englishman – 25 years after he won his first event. O’Sullivan celebrated by pouring a bottle of water over his head and jumping into the crowd after he was given his trophy.

He told reporters after the match that it was amazing and he couldn’t believe it. He added that he played well, but he still had to convince himself because of how hard it felt, and that it was a great was to create history and beat Steve Davis’ record.