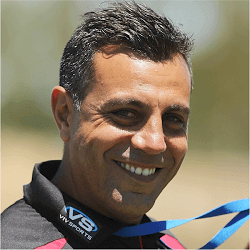 As late as Thursday night, Brisbane Roar coach John Aloisi was telling reporters that his side had the class to terminate Sydney FC’s unbeaten record in the 2017 FFA Hyundai A-League. It wasn’t a completely incredible pronouncement: it was, after all, the Brisbane side that stopped Sydney’s winning streak a month ago, when Roar became the first team this year to score against the Sky Blues for a 1-1 draw.

In Aloisi’s opinion, his team ‘ran all over’ Sydney in the second half of that clash, and he was confident that if they maintained as high a standard for both halves when the teams met again on Friday, Roar could come out on top. Unfortunately, Alex Brosque’s men had other ideas, taking a convincing 2-0 win for Sydney instead. To add insult to injury, they did it playing a man short for the final twenty-odd minutes of the game.

Coming off a 10-match streak without a loss, Brisbane Roar certainly looked like contenders at the start of the match. It was a hard-fought game with some excellent play from both sides, but in the final analysis, Sydney made the most of the luck and the chances that came their way, while Roar just couldn’t find the net.

Filip Holosko had a lucky break in the 35th minute, when he miskicked a dodgy pass that bounced off a Roar player. He managed to recover the ball and get it out to Bobo, who set skipper Brosque up beautifully for Sydney’s first goal. The orange shirts had some luck of their own, like a handball from Jack Hingert inside the box that went unpunished when, by rights, the Sky Blues should have been awarded a penalty.

Despite some sterling saves from Roar keeper Michael Theo, Sydney struck again in the second half. Bobo was again instrumental in setting up the goal, and Milos Ninkovic slotted it home. Shortly afterwards, Brosque was sent off after a second yellow card for foul tackles on Luke DeVere, but the Sky Blues hung on to secure victory. They remain top of the ladder with 33 points, 10 points clear of Melbourne Victory and 12 ahead of Brisbane Roar.