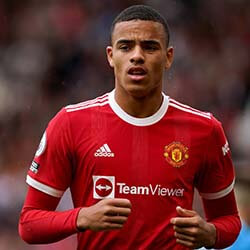 Sports wear giant Nike this week became the latest to add their voice to the Mason Greenwood saga. A statement issued by the company confirms it no longer regards the disgraced Man-U striker a Nike athlete. The big-money sponsor’s decision followed an expression of concern last week over what it described as disturbing allegations. The company also said at the time that it planned on closely monitoring any developments regarding the striker.

The 20-year-old Greenwood was recently released on bail after being taken in for questioning by police over allegations involving the rape and horrific bodily assault of a woman.

Man-U, meanwhile, has now temporarily suspended Greenwood from playing and training with the club.

Police are investigating Greenwood after his ex-girlfriend, Harriet Robinson, shared a story on Instagram showing the bruises and cuts reportedly sustained as a result of her abusive relationship with the striker. The images clearly allude to a physical attack. Robinson also posted audio footage clearly indicating threatening and abusive behaviour on the part of Greenwood.

The striker made his debut with the club in 2019. He has made a total of 129 appearances for the club, and has scored 35 goals.

But according to a prominent English news publication, Greenwood’s suspension has created something of a division within the club. Some in the dressing room have apparently expressed the notion of Greenwood being innocent until proven guilty in a court of law.

Others, including Cristiano Ronaldo and Victor Lindelof, are said to have broken all ties with Greenwood.