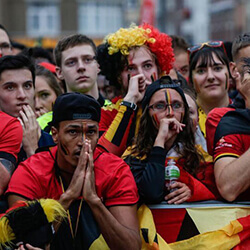 Despite their loss to France in the latest semi-final match, Belgium intends to hold a bus parade celebrating the players and the season that Belgium has faced so far. The Red Devils’ spirits remain high and the team was congratulated despite coming so close to the final game of the World Cup this year.

The parade will be taking place in Brussels, and will feature meetings with King Philippe at the Royale Palace of Brussels. Fans are expected to crowd the streets as they cheer on their team who fly back after their last match in Moscow. The team will be ushered on to the balcony of the City Hall, where they will be addressed by the King.

Roberto Martinez has told reporters that he and the team plan to remain strong ahead of their upcoming match, which will see them in a third-place play off against England, which will be taking place in St Petersburg. He added that he does not intend to make any changes to the team, saying that all changes were made ahead of the start of the game against England.

The English team, on the other hand, is set to be flying back to Birmingham after their loss against Croatia, but there are no plans for a parade to be set for the team upon the return. Many English fans are heartbroken from the recent loss, and any planned events for the national team have since been cancelled.