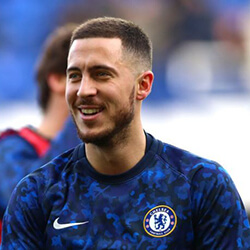 Eden Hazard was one of the scorers of the Premier League season as Chelsea claimed victory over West Ham, pushing themselves above Tottenham and Arsenal to the third spot as they race to find a place in the Champions League.

Hazard, who has recently been linked with a transfer to Real Madrid during the summer, managed to evade five players during the memorable run before the Belgium got the ball past goalkeeper Lukasz Fabianski. He then added a second late goal to add to his outstanding performance while the team played at Stamford Bridge.

Within the first few minutes of the game, Hazard had scored his 15th and best league goal of the season so far. His goal was stunning in every regard, with the Chelsea player receiving the ball inside of West Ham’s half before he made an unstoppable run with ended with a superb goal.

Gonzalo Higuain knocked a post while Hazard was denied a penalty after a seemingly foul play by Mark Arnautovic, with Argentinian Midfielder Maniual Lanzini getting the closest to scoring for West Ham with a shot that was ultimately denied by Kepa Arrizabalaga. Chelsea, who are still able to qualify for the Champions League next season by winning the Europa League, are currently three points ahead of Arsenal – who are in fifth place – after a third successive victory in the league. The Hammers have remained in 11th place after their third loss in four league games.