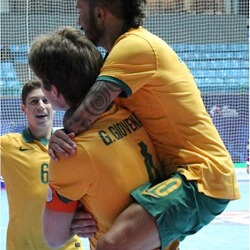 Australia’s five-a-side soccer team, the Futsalroos have won their opening match in the FIFA Futsal World Cup. This is the first time that an Australian team has ever won an opening match in the prestigious event, and it caught many by surprise. The team held off a late charge, beating Mozambique’s Os Mambas by three goals to two, to take the match and make Australian football history.

Playing at the Coliseo Bicentenario in Bucaramanga, Colombia, the Australian team started off well, dominating play in the opening minutes of the game. The Mozambicans patient approach to the game did not fare well, as Australia opened the scoring in the first 10 minutes. The play started off with Daniel Fogarty making an outstanding tackle to pass the ball though to Jonathan Barrientos. The striker wasted no time in sliding the ball under Nelson and into the goal, setting the team into motion. It seems that this early goal gave the Aussie team’s confidence an instant boost, and set the tone for the rest of the match.

Australia Stuck Hard in the First Half

Eight minutes later, Australia was on the attack again.  This time it was Adam Cooper heading for the goals after already being denied by the keeper. Cooper blasted a long range kick under the surprised keeper after a return shot from Black Rosier. While the shock of the second goal was still settling in, Mozambique were put on the back foot, as the skipper Greg Giovenali chased down a lost ball from a hasty clearance by Nelson. It seemed Australia could do no wrong as the ball ricocheted off of Giovenali’s shins and into the wide open goal.

In the second half, the Mozambicans finally found their feet, fuelled by the boisterous crowd. They achieved their first goal as a powerful shot by Calo went straight through the legs of Wade Giovenali and into the net. With one in the bag, the feisty African team put their foot on the accelerator and found a second goal compliments of Captain Dino. The final stages of the match were a nail-biter as Australia came agonisingly close to a fourth goal with Wade Giovenali and Tobias Seeto booting long distance shots. In the end, the fourth goal was not needed as Mozambique failed to find their third goal giving the Aussies a much deserved, and rare win.

Australia will now face Brazil, and Mozambique will play Ukraine, and both matches are sure to be action packed with the Aussies hoping to continue their winning streak.