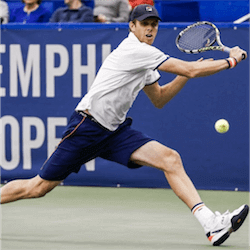 February 13th to the 19th  sees two indoor hard-court tournaments on the 2017 ATP World Tour; one in the Netherlands and the other in the USA. The ABN AMRO World Tennis Tournament, as the Rotterdam Open is currently known under sponsorship, is a 500 series event that boasts the more impressive field.

Marin Cilic, fresh from a shock Sud de France Open knock-out, is the top seed. However, he will face stiff competition at the Ahoy Rotterdam conference centre from Dominic Thiem, Tomas Berdych, Gael Monfils, Grigor Dimitrov, Jo-Wilfried Tsonga and defending champion Martin Klizam. Swiss star Stan Wawrinka was also expected to be among the top seeds, but he withdrew earlier this week with a knee injury. It’s the same niggle that plagued him during his Australian Open semi-final loss to Roger Federer last month.

Rafael Nadal was also supposed to be playing in the ABN AMRO World Tennis Tournament, but his summer stint in Australia that culminated in an epic Australian Open final against Federer has aggravated the injury he has been battling for two years, so he is out as well. Doctors have advised the Spaniard to rest, if he wants to be fit for bigger tournaments later this year.

On the other side of the Atlantic, next week brings the Memphis Open in Tennessee, USA. The Racquet Club of Memphis hosts the tournament, which is in the 250 series of the 2017 ATP World Tour, and as such won’t attract as many top-ranked players as the Rotterdam event. However, two stars who are set to play are World No. 18 Ivo Karlovic and World No. 23 John Isner, seeded first and second respectively in Memphis.

Croatian Karlovic famously set a new Australian Open record last month, in his epic 6-7, 3-6, 7-5, 6-2, 22-20 first-round win against Horacio Zeballos. American Isner holds a similar record: at Wimbledon in 2010, he and French qualifier Nicholas Mahut played the longest match in tennis history, which Isner won 6-4, 3-6, 6-7, 7-6, 70-68. So Australia’s betting fans should keep an eye on both Isner and Karlovic for the Memphis tournament.