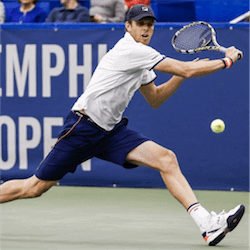 Australia’s sports betting enthusiasts don’t get to see top-class men’s tennis indoors often, but next month sees two tournaments on either side of the Atlantic at the same time, from February 13-19. The ABN AMRO World Tennis Tournament in Rotterdam, as the Rotterdam Open is known under its current sponsorship, is a popular stop on the ATP World Tour 500.

Held in the Ahoy Rotterdam convention centre, it has attracted some top-ranking ATP talent for 2017 that will leave punters with tough choices. Switzerland’s World No. 4, Stan Wawrinka, for example, will be coming from an impressive Australian Open.

Australian World No. 13 Nick Kyrgios will also be fired up, eager to bounce back from his ignominious second-round exit from the Australian Open. The 21-year-old went down in five sets to Italian Andreas Seppi, his frustrated outbursts eventually landing him a $7,321.00 fine for obscenity and racquet abuse.

But before he or Wawrinka can lay claim to the Rotterdam title, they will have to overcome some stiff competition from the five players ranked at Nos. 8-12 ahead of Kyrgios: Austrian Dominic Thiem, Spain’s Rafael Nadal, Czech Tomas Berdych, Belgian David Goffin, and France’s Jo-Wilfried Tsonga.

The Memphis Open also runs from February 13-19, with qualifying rounds from February 11. So it obviously can’t boast the same depth of Top-13 talent as the Rotterdam tournament, and it may not get as much attention from sports betting fans. Nevertheless, as the only US ATP tournament played on indoor hard courts, the Tennessee event has rarity value, and it isn’t completely devoid of star players to watch.

World No. 19, the USA’s John Isner, is the top seed expected at the Racquet Club of Memphis, but he has some strong competition. Croatian Ivo Karlovic is at No. 21, fresh from setting a new record of 75 Aces while winning his first-round Australian Open match against Horacio Zeballos 6-7, 3-6, 7-5, 6-2, 22-20. The fifth set alone stretched to almost three hours.

Australian Bernard Tomic and Americans Steve Johnson and Sam Querrey, ranked at Nos. 27, 30 and 32 respectively, are also signed up for the tournament, and all three are capable of troubling the top two seeds. With the winner for the past five years straight, Japanese World No.5 Kei Nishikori, not returning to defend the title this year, it’s a more open Memphis Open than most.