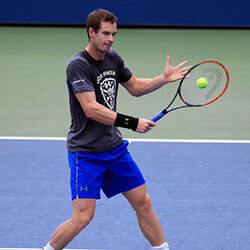 Andy Murray has claimed victory for two games against world number one Novak Djokovic during a practice match as part of their preparations for the upcoming Australian Open. The Scot, who was seemingly laboured during the practice, held held his service only once, and was falling behind at 6-1, 4-1 by the time the session had come to the end.

Murray, who is a three-time Grand Slam champion, missed most of the last season due to a hip surgery that he underwent, saw his rank tumble down to 230th overall. Murray has also lost four times to Serbian Djokovic in the Australian Open finals in previous years.

The practice set and a half was curtailed due to another practice session that was booked to follow straight after, and was watched by 2000 people at the Margaret Court Arena show court located in Melbourne park.

32-year-old Murray, who has only played 12 matches since his return from his surgery last year, will soon find out who his opponent will be that he’s set to face for the first round of the Australian tournament. The player’s first tournament since September ended with a second-round loss to Russian world number 16 Daniil Medvedev, which was played at the Brisbane International. The Australian Open, one of the largest tennis championships in the world, is set to take place throughout the entirety of January and will feature some of the best-ranked players currently