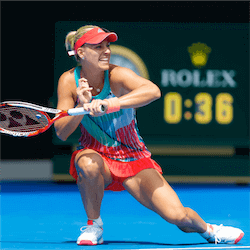 Angelique Kerber Through to Second Round of Australian Open

Woman’s World Number One Angelique Kerber has made a successful start in her bid to retain her Australian Open title in 2017. Despite a shaky start, the 28-year-old German fought her way through at tough opener to seal her place in the second round at Melbourne Park on Monday night. It remains to be seen what the shaky start means for her long-range hopes but at the end of the day, Kerber got the job done and is feeling good about her chances.

In 2016, Kerber made headlines by defeating former World Number one Serena Williams to win the Australian open for the first time. She then went on to lose the Wimbledon Final to Serena before picking up an Olympic medal in Rio. At the US Open, Kerber picked up her second title for the year after beating Karolina Pliskova in the final. Kerber ended the year ranked at number 1 and received the top seed for the Australian Open competition.

Despite her 2016 performance, Kerber entered this year’s competition in sketchy form, suffering defeats in Sydney and Brisbane to Daria Kasatkina and Elina Svitolina respectively. The German is bidding to become the first female player to successfully defend her Australian Open title since Victoria Azarenka achieved the enormous feat in 2013. Facing off against Ukraine’s Lesia Tsurenko, Kerber got off to a bit of a shaky start, struggling with her serve and failing to land her ground strokes.

Kerber Loses Focus While Serving for the Match

Once she found her groove, Angelique Kerber proved why she is ranked at number one in the world. Against an in-form Kerber, the less experienced, Lesia Tsurenko was reduced to chasing down her own serves and holding onto a few consolation points off a powerful backhand. However, Kerber’s nerves seemed to return when she was serving for the match. The German couldn’t find the line and allowed her opponent to break back to 5 games apiece.

Grabbing the opportunity, the world number 51 gave it all she had to break the Australian Open champ a second time in a marathon game to send the match into a third set. Refusing to be put down, Kerber turned the match into a battle of wills. The dynamic German took an early break in the third set and quickly found herself 4-2 up. After powering through the next two games, Kerber sealed her place in the second round dispatching Tsurenko 6-2, 5-7 and 6-2.