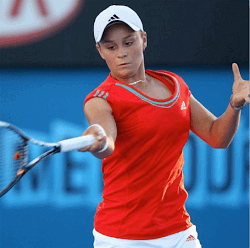 Ash Barty, who has been hailed as one of the most talented Australian tennis players of her generation is struggling to return to professional tennis. The former Wimbledon Junior Champ hit a serious hurdle on Wednesday when she retired from her opening round match at the $50,000 Bendigo International during her warm up. Barty burst onto the international tennis scene in 2011 when she won the Wimbledon Junior title at the age of 15.

Barty’s natural tennis ability and supreme court craft drew international attention with many people comparing her to the sensational Martina Hingis who made a huge impact on woman’s tennis at an early age. In a time when teenage tennis stars were an endangered species, Barty graced the courts of three Grand Slam finals doubles in 2013, finishing as runner-up in the Australian Open, Wimbledon and the US Open with partner Casey Delacqua.

During her time on the junior circuit, Barty peaked at number twelve in the WTA doubles rankings. In 2014, her rankings tailed off and her singles ranking fell far below the standard she has set in the doubles.  At the 2014 US Open, Barty reached the quarterfinals in the mixed doubles competition. In a shock move, Barty then gave up on professional tennis in response to the general stresses of playing internationally. Almost a year later, Barty made sporting headlines by joining the Brisbane Heat cricket team.

After a brief flirt with Australian woman’s cricket, Barty re-dedicated herself to tennis in February this year. While struggling to play herself back into her former tennis glory, Barty suffered an arm injury shortly before her match against Japan’s Risa Ozaki. The young star had taken time off in August for a nagging stress problem in her right forearm. On Wednesday, Barty hit another hurdle in her stop-start tennis career when she retried before her first round match at the Bendigo international.

It is now a waiting game to see if the former tennis sensation will be able to play in the $50,000 ITF Futures event which will be held in Canberra on Tuesday. Nicole Pratt, head of Australian woman’s tennis told that press that Barty would come under consideration as a wild card for Tennis Australia in the upcoming WTA tournaments in January of 2017 but at present, her future on the court hangs in the balance.