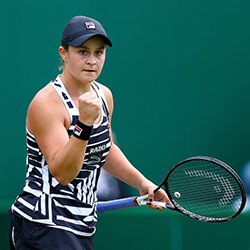 Ashleigh Barty has beaten Elina Svitolina in the WTA finals to earn the biggest prize money reward that has ever been offered in professional tennis. The Australian number one claimed a 6-4 6-3 victory to take the title in Shenzhen along with a prize of $4.42 million. 23-year-old Barty had lost all of her last five previous matches again her Ukrainian opponent, who was the defending champion for their final confrontation.

But she managed to pull through a difficult second set that featured five breaks of serve, and claimed her victory when Svitolina had netted. Barty won her first Grand Slam title while playing at the French Open in June, and will be ending the season as world number one. Svitolina, 25, who had previously reached the semi finals of both the US Open and Wimbledon, has finished the year without earning a title for the first time since 2013.

The thrilling final between the defending champion and the top seed was a much-needed positive finish to the finals, which had encountered some issues while it made its debut in Shenzhen. The slow speed of the courts had received some criticism, while crowds in the earlier sections of the tournament had not been packed to the organiser’s original specification. The biggest threat to the event, however, were the high demands put on the players over the course of the tournament, eventually resulting in four of the final eight withdrawing from injury.