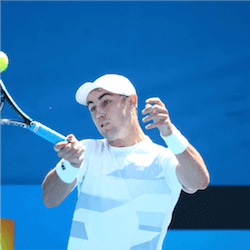 However the rest of his 2017 Aegon Championships turns out, Sydney tennis player Jordan Thompson will be dining out for years to come on his Round 1 match on Tuesday, in which he dispatched World No. 1 Andy Murray from the tournament. The 23-year-old is 90th on the ATP rankings, and was fortunate even to be playing in the Aegon, as London’s 127-year-old Queen’s Club Championships is known under present sponsorship.

As a loser in the qualifiers, Thompson got a lucky break on Day 2, when a wrist injury forced Aljaz Bedine to withdraw, and the Australian was his replacement on the Round 1 roster. In a stunning performance, it took him only one hour and 43 minutes to beat Murray 7-6 (7-4), 6-2.

The Queen’s Club in West Kensington, London, has been holding its annual men’s singles and doubles tournaments as a warm-up to Wimbledon since 1890. Murray will be the defending champion at Wimbledon this year, as he was in the Aegon Championships.

Murray is also the record-holder in the Queen’s Club Championships: he has won the singles tournament five times since 2009, including consecutively in 2015-16. So the shock loss to Thompson robbed him of a shot at a hat-trick, too.

Thompson on Top Form; Murray Off

The British OBE was not in the form that has won him five titles at Queen’s Club, three Grand Slam championships, and an ATP World Tour Finals victory against Novak Djokovic in London last year. His forehand play was way off, and he was incapable of breaking Thompson’s serve; the first time in 137 matches that this has been the case.

That said, there’s no taking anything away from Thompson, who rose to the occasion magnificently to take his first ATP World Tour win on grass, and his first against a Top 10 player. He is also the first Australian player to beat Murray in an ATP-level singles game, and his winning serve was his 12th ace of the match.