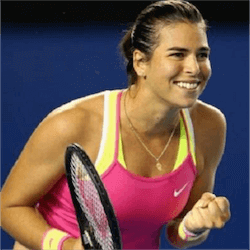 With fourth seed Francesca Schiavone out of the 2017 Hawaii Tennis Open thanks to an ankle injury, players lower down the ladder have one less obstacle to worry about in their quest to upset the top seeds.

It looks like Australia’s Ajla Tomljanovic will move up to 12th seed before the WTA Tour 125K Series tournament starts in Oahu on 20 November, and she’ll be buoyed even further by her new position on the WTA world rankings.

Tomljanovic shot up 15 places on Sunday, 12 November, when she finished runner-up to the USA’s tournament top seed Taylor Townsend at the ITF USA 40A in Waco, Texas, having taken out second seed Nicole Gibbs in an earlier round. The Croatian-born 24-year-old moved from WTA world No. 151 to No. 136 after making the Waco final.

Playing Under a Croatian Flag in Hawaii

Tomljanovic should have the support of Australia’s tennis fans in Hawaii, not the least of whom is Nick Kyrgios, her boyfriend, but despite her 2014 application for citizenship that allows her to compete in Grand Slams under the Southern Cross, she won’t officially be an Aussie contender on Oahu.

While she awaits her Australian passport, the Zagreb-born 2014 Australian Open doubles quarterfinalist competes in non-Grand Slam tournaments under the Croatian flag. Nevertheless, it’s unlikely that local tennis fans are going to let that stop them claiming the only Australian in the tournament’s top 20 seeds as one of their own.

Uphill Battle Ahead of Her in Hawaii

Tomljanovic has been playing since the age of six, and in 2015 was ranked world No. 47, so she’s quite capable of causing a few upsets at the Hawaii Open. However, she faces some stiff competition.

In 2016, the inaugural Open was won by American CiCi Bellis, with China’s Zhang Shuai the runner-up. More recently, Zhang has overtaken Bellis on the WTA ladder, so she will most likely be top seed in Hawaii, particularly since Bellis has withdrawn from the 2017 tournament.