Australia Confirm Their Spot in the Davis Cup 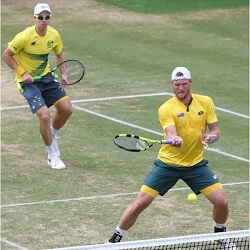 Australia Confirms Their Place in The Davis Cup for 2017

Australia have officially confirmed their place in the elite 16-team Davis Cup World Group after an emphatic 3-0 victory over Slovakia in the playoffs. Earlier in the week, both Nick Kyrgios and Bernard Tomic won their respective matches in straight sets to set up a good start for the Aussies. Kyrgios make short work of Andrej Martin, while Tomic swept aside Jozek Kovilik in a convincing display of power tennis. This gave the doubles pairing of Sam Groth and John Peers the confidence they needed to make a clean sweep.

The Aussie pair started off well, putting their opponents Andrej Martin and Igor Zelenay on the back foot from the first set. The pair put on a powerful display racing to a two-set lead with hardly a challenge from the rattled Slovakians. The more experienced Peers controlled the net while Sam Groth used his powerful serve to dominate play. In the third set, Markin and Zelenay finally found their feet and were able to hold their serve forcing the set into a tie-breaker with neither side giving away any unforced errors. In the tie breaker, the Slovakian got a mini break and held on to send the match into a fourth set.

The fourth set saw the Australians struggling to dominate the game. Buoyed by the success of the third set, the Slovakians held their serve with neither side able to break their opponents. Going into the fourth set tie breaker, the Slovakians looked on top. With the pressure on, Australia stepped up and took the tie breaker 7-2, pulling off a massive win for the team and securing their place in the Davis Cup World Group for 2017.

After being sent into the World Group playoffs by the USA earlier this year, the comprehensive win for Australia puts them is good position to start their 2017 campaign. As head of the Australian team, Lleyton Hewitt believes his team has what it takes to re-capture the Davis Cup. Making it to the semi-finals without Kyrgios shows a depth to the team and is a good sign for next year’s campaign.

As the second most successful team ever to have competed in the Davis Cup, Australia is hoping to add a 29th win to their already impressive 28 titles. By securing their place in the tournament they are already on the road to a potential victory.