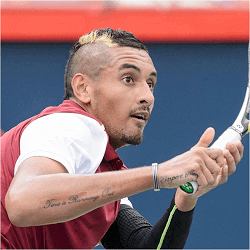 The Australian Open Seeds for 2017

2017 is already proving to be an interesting year for tennis following the announcement of the 2017 Australian Open seeds for the men’s and woman’s tournament. Local boy Nick Kyrgios will enter the competition as the highest seeded Australian player, carrying the nations hopes on his shoulders. Kyrgios has been seeded at number 14 while fellow countryman Bernard Tomic comes in further down the order at 27.

For Roger Federer coming in at 17, this is completely unchartered waters. This is the swede’s lowest seeding in over 15 years after missing most of the second half of the 2016 season. Andy Murry tops the seeds in the men’s tournament with Novak Djokovic in second position. In the woman’s tournament, Angelique Kerber takes her place at the top of the group while Samantha Stosur has slipped down to the 18th seeding after a five month losing streak. Last year’s Open star player Daria Gavrilova was handed the 22nd seed.

The full list of the men’s and woman’s seeds are as follows: