Australia’s Nick Kyrgios Out of the US Open Due To Injury. 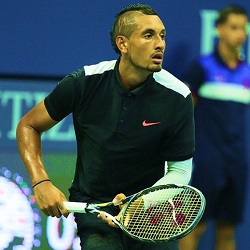 Australia’s Nick Kyrgios has withdrawn from the US Open due to a hip injury effectively ending Australia’s chances for a singles title in the tournament. The pain riddled 21-year-old was forced to retire from his third round match against Ukraine’s Illya Marchenko after trailing two sets to one. The usually high-spirited 14th seed complained of an injury during his first two matches with no foreseeable recovery. In speaking about his injury, Nick admitted that he felt like he had been hit by a bus at one point during the match.

Kyrgios started the match well as he broke Marchenko’s service on the Ukraine’s very first service game. There was no sign of injury when Kyrgios proceeded hold his own game from 15-40 down to climb to a 3-0 lead in the first set. He then went on to breeze through the first set holding onto the one break given. It seemed everything was going well as Kyrgios produced a series of beautifully executed backhands down the line and out of reach of his opponent.

Kyrgios seemed in fine form as he brought the crowd to their feet when he executed an incredible backhand winner from around the net post in the fifth game of the third set. Things started to fall apart though as the 14th seed dropped his service after a double fault. This gave Marchenko the opportunity to level the match and take control. In the third set, Kyrgios all but handed the game to his opponent, losing the set in just 34 minutes.

It was clear that his injury was hampering his performance. The injured Australian needed two courtside treatments from the trainer and was overheard saying that he couldn’t move and he couldn’t turn, and he was wondering what the point of continuing was. In the end, Kyrgios had to withdraw from the match and tournament. The loss was his first in 21 matches against an unseeded opponent in a grand slam event. Marchenko admitted that he felt sorry for Kyrgios but was delighted to be through to the final 16. The Ukraine will now face third seed Stan Wawrinka for a place in the Quarter Finals.

This dashes Australia’s hopes for a top spot in the tournament and is sure to throw many punters, as they had been backing Kyrgios for a win.