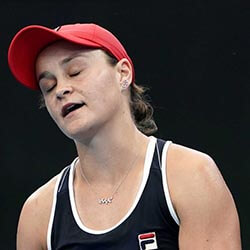 Australian tennis star Ash Barty has announced having taken the exceptionally difficult-to-make decision not to defend her French Open title this year. Instead, due to mounting concerns over possible border closures, spiked infections, and the like, Barty said she’ll be staying put at home in Australia.

Two main motivating factors regarding her surprising decision have been the inability to train under the guidance of coach Craig Tyzzer, and her having become acutely aware of the health risks associated with travelling to France, explained the tennis star at the time of her announcement. Though difficult as any a decision to have been forced to make, said the Aussie champion, the 2019 French Open will remain to her the absolute highlight of her professional career to date.

As for what a summer spent in Australia now holds following her decision, Barty says she’ll be focusing on the health of her family and her team. She also thanked her fans for their unwavering support and said that though disappointed from a professional point of view, she knows full well that 2020 has been a harrowing and challenging year for just about everyone.

Initially scheduled to have been played in May, the upcoming French Open will following a forced reschedule, be played starting September 21. Barty previously also opted out of competing in the spectator-less US Open currently taking place in New York.

As for how current health guidelines are anticipated to affect spectatorship at the upcoming French Open, only a quarter of the usual number of fans are expected to be permitted courtside once the competition finally gets underway.