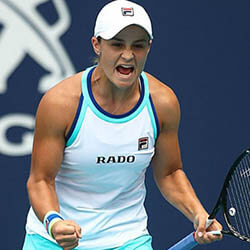 Ash Barty paid a moving tribute to her retiring countrywoman Jessica Moore after beating her in the Australian Open Women’s Doubles. She’s not satisfied with the incredible Singles matches and has now progressed through to the second round of Women’s Doubles at Melbourne Park.

The No. 1 player in the world was teamed up with Julia Goerges, from Germany, against Astra Sharma and Moore. Barty and Georges triumphed under a closed roof in Melbourne Arena, with a final score of 6-2 6-3. But when she was asked about her victory while on the court after the match, Barty immediately switched the focus on to Moore.

Barty told reporters that they may have not been aware that Moore is stepping down after the Australian Open and that she was thrilled to be able to share this experience with her. Barty said that it was Moore who got her back into Tennis after she took a break from 2014 to 2016. She said that Moore was her first partner when she returned.

The gracious victor then called on her friend to come forward and be interviewed herself, which made Moore break into a massive grin. She spoke of appreciating Barty’s kind words and described sharing a court with the superstar as an absolute pleasure. She said that Barty is a wonderful woman and she’s happy that we have someone like her to look up to.