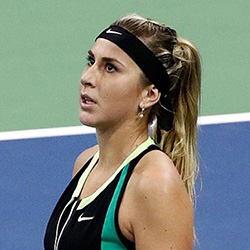 World number two Simona Halep stated that her body was too tired to stand up against Swiss Belinda Bencic in the quarter finals of the Dubai Championships. Bencic, who managed to save six match points before besting Aryna Sabalenka during the previous round, show her strength as she won 4-6 6-4 6-2 over Halep.

27 year old Romanian Halep’s serves were broken a total of 7 times be her 21 year old opponent. After the match, Halep said that she couldn’t serve well because she felt cramping in her Achilles, but added that there are no excuses. She has completed nine matches in the last two weeks, having represented her home country in the Fed Cup, and reached the Qatar Open final. She continued by saying that her body felt tired, and even though she didn’t give up, she felt that she didn’t have enough to win, but played until the end anyway.

Bencic, who is ranked 45th in the world, will be going on to face defending champion Elina Svitolina of the Ukraine who is sixth seeded, and who beat Spanish Carla Suarez Navarro 6-2 6-3. French Open champion Halep, who remains without a full-time coach after leaving Australian Darren Cahill in 2018, was forced to pay for missed opportunities during the second set, and gradually lost her nerve and concentration in the ninth as Bencic broke to love and served well for the second set of the match.