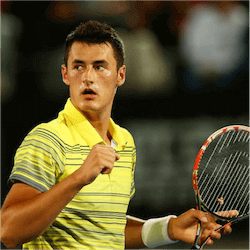 Bernard Tomic will sit out April’s Davis Cup quarter-final against the United States. This will be the tennis player’s second absence after he withdrew from a first round match against the Czech Republic due to scheduling problems.

The team announced by Captain Lleyton Hewitt for the match to be played in Brisbane remains unchanged. Speaking to reporters, Hewitt would not be drawn on whether or not there was still place for Tomic on the team.

Instead, he expressed his confidence in the current team’s ability to take Australia to victory, and pinned his hopes on Nick Kyrgios, Jordan Thompson, Sam Groth, and John Peers. Kyrgios and Thompson have both excelled in their singles matches, while Groth and Peers have proved themselves to be in top form in doubles matches.

The Pressure is On Kyrgios and Thompson

Hewitt sang Kyrgios’ praises, and said that he would rely on Kyrgios to get the team through what looks set to be a difficult match. However, given the player’s performance since facing the Czech Republic, Hewitt thinks that Kyrgios is the right man for the job.

The player will still see fourth-round action in Miami after thrashing Novak Djokovic not once, but twice in the last month.

World number 79 Thompson, who made his Davis Cup debut in February, has already shown himself to be an asset to the team. Thompson showed what he is made of when he out-performed Jan Satral and Jiri Vesely.

Hewitt described Thompson’s game as well handled. He added that, even though the quarter-final would present Thompson with a challenge, he is confident that the player can hold his own.

According to the captain, Groth and Peers will need to improve their game before they face the US in the quarter-final, but recognised that the pair had already shown great improvements in the couple of ties they have already played together.

US Set to Put Up a Fight

Hewitt was under no illusion that Team USA will go down without a fight. Instead, he fully expects the task to be a tough one.

Not only has Australia lost to the US previously, but the US’ John Isner, Steve Johnson, Sam Querrey, and Jack Sock also beat Switzerland 3-0 in Alabama recently. Hewitt is fully cognisant of this, as well as the fact that the US team has some versatile doubles players who play a good game regardless of the pairings in which they play.

However, the Aussie team remains undaunted by the challenge facing them in the form of the Americans. Hewitt said that all the players were excited for the quarter-final, and that the tie looks like it is going to be a good one.