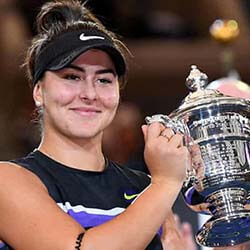 Canadian youngster Bianca Andreescu’s long-awaited comeback could very well be exactly what the doctor has ordered for a world of tennis currently plagued heavily by stories of controversy and disappointment.

Soon to return to the US Open for the first time since her amazing win back in 2019, the young tennis star’s future appears to be hanging in a precarious balance. While she’s technically ranked current world No. 7, the reality of the matter is that she’s not beaten a Top-50 player since March 2021.

Also staring her in the face is that she’s really ranked 35th on the WTA’s list – its only that her rankings appear stronger than what they are due to the points freeze brought about by the uncertainties of the ongoing global health crisis.

But taking off quite a bit of time has served her well in more ways than one, the youngster explained during a press conference on Friday. While significant changes have happened, including the switch from long-time coach Sylvain Bruneau to new addition to the team, Sven Groeneveld, Andreescu said she feels healthier now than in a long time because of her having adopted a much more balanced lifestyle.

This week’s US Open will be Andreescu and Groeneveld’s first major tennis event together.

She returns to the event as seventh seed but due to recent circumstances, will have to prove her worth anew barring the halt of injury if she’s to make it back into the event’s spotlight.