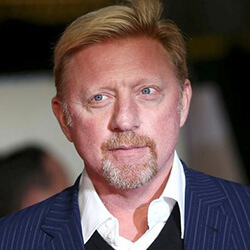 An auction of memorabilia and trophies from Wimbledon champion Boris Becker’s career has made £680,000 in total. The highest bid from the lot was a massive £150,250, which was for the US Open replica trophy that Becker was awarded with after beating Ivan Lendl in 1989. Along with this and 82 other items was a replica of the Davis Cup, which was sold for £52,100.

51-year-old Becker, who is now a TV pundit and coach for young players, was declared bankrupt in June of 2017 by a London court. The auction was put together in order to pay off the outstanding money that Becker owes, and consists of a range of different belongings, including signed memorabilia, watches, and some of the clothing that he wore throughout his career.

In January earlier this year, the German player had issued an appeal to locate five Grand Slam trophies that he said had been lost, along with an Olympic gold medal that he won for the doubles in 1993, The auction began last year, but was put on pause when Becker claimed diplomatic immunity against legal action, where he insisted that his appointment as a diplomat of the Central African Republic rendered him exempt from any legal processes.

The claim was dropped in December last year. Mark Ford, lead trustee to the bankruptcy estate of Beck’s stated that the highest bid for last year was the US Open Trophy, which saw its value increase substantially this year.