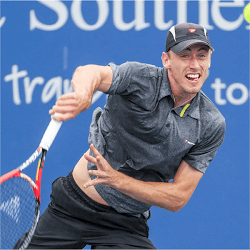 John Millman Out of Brisbane International

Just days before the tournament starts on January 1, 2017, Brisbane tennis player John Millman has pulled out of the Brisbane International. The 27-year-old, currently ranked 84th in the ATP tour, although he advanced briefly to 60th in May 2016, is still recovering from hip injuries. He has decided that his hip isn’t fully healed, and does not want to put it under any more stress just yet.

The news is disappointing to Millman fans, but it could be good news for another Australian player. Millman was on the main draw as a wildcard, and that wildcard can now be awarded to another player who would not qualify otherwise. Many punters feel that Sydney’s James Duckworth deserves the spot, because he was originally denied a place in favour of Elias Ymer, despite the Swede being 57 places lower than Duckworth on the ATP rankings.

Ymer’s entry to the tournament was part of a deal between Tennis Australia and a management company, and caused a fair amount of controversy. So if Millman’s withdrawal lets Duckworth secure a place in the tournament, many fans will see it as poetic justice.

Second Time that Millman’s Been a Sport

However valid his injury concerns are, it’s still remarkably sportsmanlike of Millman to cede his place so that another player can have a go. Supporters who have followed his career since he turned pro in 2006 will not be surprised: he has done this before. In 2014, Millman had a TA reciprocal wildcard entry to the French Open. Plagued by a shoulder injury, he gave up that wildcard as well, allowing another Australian hopeful to take his place.

He may no longer be in contention for the Brisbane Open, but he remains an inspiration to young players for his dedication to the fair go. Punters can expect lots of thrills from the tournament’s top men’s seeds: Milos Raonic, Stan Wawrinka, Kei Nishikori, Dominic Thiem and Rafael Nadal; but Millman’s decision will be remembered as an example of the true spirit of the sport.