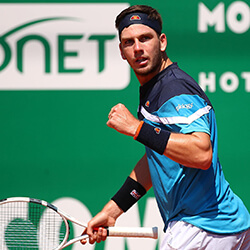 British Cameron Norrie will be joining Kyle Edmund if he manages to take n more win, where he will be able to progress to the quarter finals of the Monte Carlo Masters, making his first appearance on this famous clay court.

The 24 year old is set to become a member of the top 40 club if he is able to be Italian qualifier Lorenzo Sanego after having earned the third round draw by besting Hungarian Marton Fucsovics 7-6 6-3. Norrie is close behind Edmund, and may soon be threatening his place as the number one player in Britain if the Yorkshireman fails keep his momentum going. It could lead to a situation for the next ATP Cup team event in Australia at the start of the next season.

Edmund, who is number 23 in the world at the moment, has given many the impression that he has not come to terms with the pressure of being the number one player for his country, and it’s pressure that he may begin to feel if it comes to the point where he may lose the title to another Brit. Norrie had never won a match at Masters level before, but worked hard against World number 37 Fucsovics, and managed to recover from 3-5 down for the first set.

Talking about his win, Norrie said that it’s been a couple of years since they’ve had three different players from the UK in the top 100.