Chung Hyeon Out Of French Open 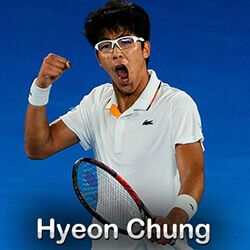 Chung Hyeon, Australian Open semi-finalist, has lost the chance to repeat his victories once again after having to withdraw from the French Open due to an ankle injury. Nicknamed “the Professor” due to the thick glasses he wears on the court, Chung has had some problems adapting to the ATP Tour, which has put severe strain on his body.

Chung, who was forced to give up his game in the Australian Open played in Melbourne Park against Roger Federer due to severe blisters, has reported that he’s suffered with the ankle injury through the clay-court session.

He has also previously withdrawn from two separate events, including the Lyon Open and the Italian Open.

In a post to social media, Chung had this to say, “Unfortunately I had to withdraw from Lyon yesterday and now Roland Garros. I have been struggling with an ankle injury during the entire clay season. An MRI scan has revealed that I have build up of fluid in the ankle joint which might require a small procedure and then extended period of rest.”

His withdrawal from the French Open will most likely drop his world ranking significantly. His injury caused him to leave the Barcelona Open, despite him having landing 19th in the top 20 of the ATP rankings. In reply to his pulling out of the Barcelona Open, Chung’s agency told reporters, “Although it is not a serious injury, he decided to skip the tournament in order to be in best form for the French Open.”