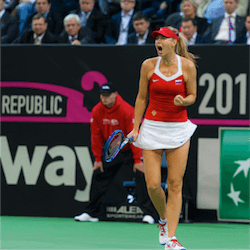 The Fed Cup is rightfully seen as the female equivalent of the Davis Cup, and often called ‘the World Cup of Women’s Tennis’. It’s an annual event that attracts many sports betting fans in Australia, because although it features some of the top WTA players in the world, what matters is the overall team result for each country, and not just individual victories.

The 2017 Fed Cup begins on February 11-12, with matches being played simultaneously in four cities around the globe: Ostrava, Czech Republic; Minsk, Belarus; Geneva, Switzerland; and Lahaina, Maui. Belarus will host the Netherlands, Switzerland will be at home to 2016 runner-up France, and the USA will play Germany in Hawaii.

But the first-round clash that should generate the most action and excitement will be between defending champions Czech Republic and Spain in Ostrava, the north-eastern Czech city that is now a World Heritage Site, thanks to its one-time fame as the heart of the Silesian steel industry. If the Spaniards are facing the same Czech team as last year, they will have a tough row to hoe.

Going back to 1975, when Martina Navratilova put then-Czechoslovakia on the world tennis map, the Czech team has won the Fed Cup 10 times. If they make it to a final, they tend to win it; in the same period, their only finish as Fed Cup runners-up was in 1986.

The past decade has been particularly fruitful; since the Czech Republic team fought their way out of World Group II in 2008, they have finished high enough on the World Group ladder every year to be excluded from play-off games, so they haven’t faced even the possibility of relegation back to WG II in eight years. Since 2008, Czech Republic has also won the Fed Cup five times, in 2011, 2012, 2014, 2015 and 2016: half of its total record.

So punters could do worse than back them to retain the title this year. If they field the same team as they did in 2016, namely Karolina Pliskova, Petra Kvitova, Barbora Strycova and Lucie Hradecka, they could certainly prove too strong for the Spaniards in the first round. Pliskova and Kvitova are in particularly good form right now, ranked 6th and 11th on the WTA ladder respectively.