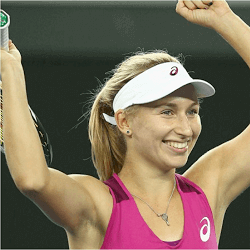 After a successful first round match at the Australian Open, local tennis star Daria Gavrilova said that she was just not capable of winning a match in under two hours. It turns out she was true to her word as she successfully battled her way past a fiery Ana Konjuh in a time of 2 hours and 1 minute. The Australian young tennis hopeful did not make things easy for herself, taking the long road to the third round against the Croatian young gun.

At the start of the match, things were going swimmingly for Gavrilova, as she cruised through the first set without much of a fight. Konjuh, who started her career as a successful junior player, made the transition to the pro tour just three year ago. The inexperienced Croatian could not find an answer for the might of the Australian.

In the second set, things took a sharp turn. With a powerful serve at her disposal, Konjuh blasted her way into the second set, forcing Gavrilova to back step and take stock of the situation. Things got worse for Gavrilova as she was handed a time violation by the chair umpire for taking longer than she should for her serve. Speaking to the press, Gavrilova admitted that she lost her cool on the court with the intensity of the match forcing her to make silly mistakes.

With the momentum firmly in her favour, Konjuh capitalised on Gavrilova’s nerves and claimed the second set six games to one. Going into the third set, Gavrilova was able to settle her nerves and adjust Konjuh’s big serve. After the match, Gavrilova explained that she had to power through and get the win at all costs. With plenty of support behind her, the young Australian traded serves with Konjuh, eventually breaking the Croatian in a battle of wills.

Gavrilova served out the match to confirm her place in the third round for the second year in a row. In 2016, the Australian made it through to the fourth round of the tournament but she is not counting her chickens just yet. Speaking to the press, Gavrilova admitted that she was not thinking of the future just yet. She wants to be in the moment and play the best she can in front of a home crowd. Gavrilova will next take on Timea Bacsinszky who despatched Danka Kovinic earlier in the day.