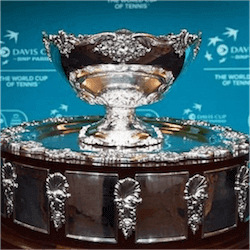 Australia’s Davis Cup team made short work of Czech Republic in their first-round clash at home in Kooyong on February 3, 4 and 5, winning 4-1. That takes Australia through to the April quarter-finals against the USA, the team that won a 5-0 Round 1 clean sweep at home against Switzerland.

Happily, Australia’s sports betting fans don’t have to wait for the action to start on April 07 to get a bet on. Just sorting out which Australian city gets to host the tie might be worth a punt. There are five in the running.

Melbourne and Sydney Get Loads of Tennis

There are two ITF criteria a venue needs to meet to be considered for a Davis Cup quarter-final tie: a hard-court surface and a seating capacity of at least 6,000.

The 14,820-seater Rod Laver Arena at Melbourne Park qualifies, but it’s the venue for the Australian Open, which ended recently. It doesn’t seem fair to award Melbourne another lucrative, prestigious tournament straight away, while other cities could use the publicity and revenue just as much.

Sydney presents the same dilemma. The Ken Rosewall Arena at the NSW Tennis Centre seats 10,000, but it also hosted Australia’s 3-0 Davis Cup World Group playoff win against Slovakia last year. There is a definite case to be made for giving the quarter-final tie to one of the other three contenders.

Gold Coast supporters point out that Australian players will be returning from the Miami Open for the Davis Cup QF, making an eastern seaboard venue preferable. They are lobbying for Brisbane’s Queensland Tennis Centre. Its Pat Rafter Arena only holds 5,500, but by converting some of the members’ boxes to temporary seating, capacity can be increased to 7,000, so Tennis Australia may well consider the Brisbane venue.

Canberra’s AIS Arena has a brilliant new tennis facility, so the capital could host Davis Cup action for the first time, but the cold weather in April is a deterrent. The Arena’s indoor tennis configuration can only seat 5,000.

The outsider, only because it is a little timeworn, is Adelaide’s Memorial Drive. It has the required capacity of 6,000, and it would be good to see South Australia highlighted on the world tennis stage for a change. However, it’s also overdue for refurbishments, so Tennis Australia might decide it’s too shabby for such a prestigious event.