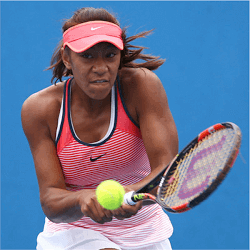 As one of Australia’s most talented young tennis players, 16-year-old Destanee Aiava is set to make history next month as the first player born in the new millennium to play at the Australian Open or any Grand Slam. Having already secured her spot at the prestigious Grand Slam event, the dynamic athlete has cemented her place as one of Australia’s top players by cracking an invitation to the exclusive Kooyong Classic tournament a well.

The young Narre Warren tennis prodigy goes into the Kooyong Classic as a replacement for the injured Ajla Tomljanovic to continue an unbelievable stretch of tennis tournaments. Aiava first rose to stardom in 2013 when she won the Longines Future Aces event. Since then, she has been constantly playing at top level, despite being only sixteen-years-old. She will now use the Kooyong Classic tournament to prepare for her grand slam debut at Melbourne Park in January 2017.

Aiava earned her place at the Australian Open by securing a main draw singles wildcard with an unstoppable victory in the national eighteen and under championships earlier in the year. With her position already secured, the young star did it again, this time winning a doubles wildcard by winning the Australian Open play-off tournament with fellow Australian Alicia Smith. Aiava will have her first taste of singles action when she faces off against former Wimbledon finalist Sabine Lisicki, Qiang Wang and Sorana Cristea at the Kooyong Classic.

Speaking to the press, Aiava explained that she was thrilled at having won the wildcard for the Australian Open. To then be invited to play at the Kooyong Classic, was another blessing. She went on to say that playing at the Kooyong will be a fantastic experience playing in front of her home town fans. She believes that playing against Sabine, Qiang and Sorana will be the perfect preparation for her debut at the Australian Open.

Aiava has admitted that she would love to get the chance to play her idol, Serena Williams. Being coached by her mother Rosie, Destanee has set herself a personal goal of making it through the first round of the Australian Open. The young star said that it all feels a bit unreal. She is exited to get the chance to play both the single and the doubles competition at her favourite Grand Slam event.