Djokovic Out Of 2017 Season Due To Injury 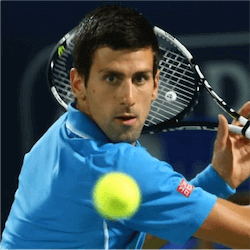 Serbian tennis ace, Novak Djokovic will miss the rest of the tennis season due to a persistent elbow injury. After almost a year of upheaval, it was widely expected that Djokovic would take an extended break from the sport in order to fully recover from his injury. This was the same right-elbow injury that forced Djokovic to retire from his quarterfinal against Tomas Berdych last month. It may have been the last straw for Djokovic who has finally decided to listen to medical advice.

The decision could not have come lightly for Djokovic. Taking a break to recover means that the 30-year-old Serbian will be absent from next month’s US Open and possibly further Grand Slams. The good news for Djokovic fans is that Andre Agassi has agreed be remain in his camp for next season. Meanwhile, the world number 4 has vowed to return to the sport stronger than ever.

Speaking to the press, Djokovic said that he will take the time off to heal and do all the suggested methods of rehabilitation. The aim is to get back onto the court as soon as possible. Djokovic said that it would take at least a couple of months off court before he can start training again. He did indicate that he was looking forward to rebuilding his game.

A Chance to Heal and Find Form

The announcement of Djokovic’s break came almost exactly one year after Roger Federer cut his 2016 tennis season short due to a persistent knee injury.  After spending over 6 months out of the game, Federer was written off, prompting speculations of retirement. The Swede then defied critics by coming back better than ever. He started off the 2017 season by winning the Australian Open and followed it up with a win at Wimbledon last month.

Djokovic has indicated that he plans on following the same path. He has hopes that a similar period of rest will give him the ability to come back better than before and allow him to rediscover the spark that took him to the top of his game. Djokovic has sought advice from various medical specialists including one Serbian doctor said that he was suffering from a “bruised bone” due to excessive use.

This will be the first time Djokovic has missed out on a Grand Slam since making his debut in 2005 at the Australian open. By the end of the year, the number 4 seed could see his rankings slip down to 10. Despite this, Djokovic is remaining positive and feels that the break is essential.