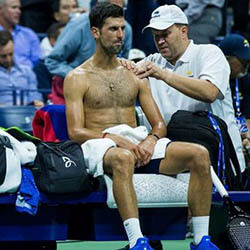 Defending champion Novak Djokovic fought for the U.S. Open fifth round with a victory over Argentina’s Juan Ignacio Londero through a knee injury. The player and top seed needed treatment a total of three times, but continued to the win 6-4 7-6 (7-3) 6-1. The Serbian stated that in his life he had not experienced that “sort of feeling too many times, after working through the disadvantage on the court.

Djokovic will next be facing fellow Serbian player Dusan Lajovic if he manages to beat American Denis Kudla. Their latest match was one of the many second-round games cancelled in New York on Wednesday following heavy rains. Only the eight games performed under the undercover roof at Arthur Ashe Stadium— where 16-time Grand Slam winner Djokovic defeated Londero in the evening session’s first game — and Louis Armstrong Stadium survived the rains most of the previous day. Djokovic, 32, is in favour of gaining his fourth title at Flushing Meadows after winning four of the previous five Grand Slams, but the sight of him in his second-round game requiring intense massages can give his competitors hope that the Serbian will not be invincible.

Immediately before reaching away for 3-3 in the first match, Djokovic requested for a first medical timeout and called the trainer again moments after clinching the opener by outlasting Londero in a 22 shot rally. Londero, who had never competed until this match in the main draw at Flushing Meadows, benefited from a fluctuating match.