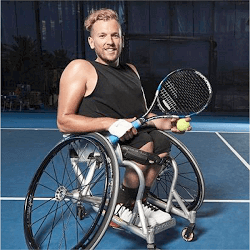 Dylan Alcott, the world number one wheelchair tennis champ has carved his name in the history books by being the first wheelchair athlete to pick up the prestigious Newcombe Medal. The triple Olympic gold medallist joins the ranks of tennis greats including Samantha Stosur and Lleyton Hewitt who have received Australia’s highest tennis award. The 25-year-old athlete received his award from John Newcombe in a one-in-a-lifetime ceremony on in Melbourne on Monday night.

Despite winning two majors in 2015, Alcott was not nominated last year, much to the disappointment of the tennis community. In 2016, Dylan Alcott shot to the top of the rankings when he successfully defended his Australian Open title. He then went on to win both singles and doubles gold medals in the Rio Paralympics and was named Australia’s Paralympian of the year.

Alcott has been on the sports scene since 2008 when he won gold in the wheelchair basketball event. He also partnered with Heath Davidson to win the World Team Cup and has collected numerous titles in Sydney, Japan Open, South Africa, Britain, France and Brisbane. On Monday, Dylan became the fourth individual winner following in the footsteps of Sam Groth in 2015, Nick Kyrgios in 2014 and Lleyton Hewitt in 2013.

Samantha Stosur, a three-time medal winner was again shortlisted after reaching the semi-finals in the French open for a fourth time. She joined other nominees John Milman, Daria Gavrilova, John Peers and Jordan Thompson at the event. Both Nick Kyrgios and Bernard Tomic were overlooked as contenders for the prestigious award despite having a number of successful tournaments over the past two years. Their snubbing was plainly evident by the fact that they never showed up to the event.

Aside from the Newcombe Medal, the other night’s awards went to Angie Cunningham for the President’s spirit of tennis award. Des Tyson Picked up the Coaching Excellence award. Kimberly Birrell was named female junior athlete of the year while the Alex De Minaur took the honours for male junior athlete of the year. Dylan Alcott picked up a second award with Heath Davidson for most outstanding athlete with a disability. In the senior’s category Leanne Swaysland picked up the award for outstanding 35+ tennis senior. The most outstanding club went to East Malvern while the most outstanding Australian professional tournament went to the Canberra International.