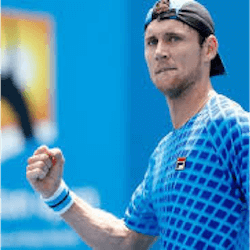 The Australian Open started on Monday with a feast of great tennis from Melbourne, and it was a particularly exciting Grand Slam opening for Matt Ebden, the Australian men’s singles number two, ranked behind Nick Kyrgios.

Ebden became the first Australian to make it into Round 2 of the 2018 tournament, but more impressively, he did so by defeating the 16th seed. The USA’s John Isner became the first big scalp to be lifted by an outsider, and the first top-20 player Ebden has beaten in a grand slam.

After Ebden took the opening set 6-4, Isner rallied briefly to take the next 6-3. But there was no stopping the Aussie, who took the next two in short order to win 6-4, 3-6, 6-3, 6-3. Ebden went through to the Round of 64, in which he is set to face Alexandr Dolgopolov of Ukraine on Wednesday.

Fans were thrilled to see Ebden coming back this late in his career, after a spate of injuries saw him fall to number 699 in world rankings at the beginning of last year. Since then, he’s worked his way back up to world no. 78, and until the start of the Aussie Open, his most recent triumph had been last week’s win against world no. 6 Marin Cilic at Kooyong.

Bencic Beats Williams in Another Shock

With the 2018 Australian Open hit by a spate of withdrawals due to injury and various other reasons, fans were happy to see men’s singles top seed Rafael Nadal still in the opening lineup, scheduled to meet Victor Estrella Burgos in their opening match on Monday.

Hopefully, the knee injury that has been troubling Nadal has healed, because fans will be hoping for a repeat of last year’s epic final between him and Roger Federer. The Swiss defending champion is the 2018 men’s singles second seed.

In the women’s singles, the big first-round upset was delivered by Switzerland’s unseeded Belinda Bencic. She beat 2017 finalist and women’s singles fifth seed Venus Williams 6-3, 7-5 at the Rod Laver Arena on Monday.

With Serena Williams already withdrawn because she’s not ready for competitive tennis yet, just four months after giving birth, this means that neither of the formidable Williams sisters will be a threat for the rest of the Open.