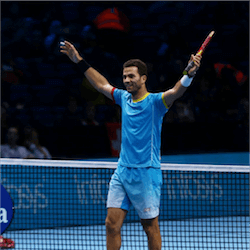 There were three ATP World Tour 250 Series running concurrently, and Australia’s clay-court enthusiasts had their focus on the Ecuador Open in Quito. The thin air of the high-altitude Ecuadorian capital is a challenge to most players, so upsets and surprises always abound. This years tournament certainly shook up the tennis world.

The second seed, Spain’s World No. 30 Albert Ramos Vinolas, is safely through to the quarterfinals, where he faces countryman Roberto Carballes Baena. Paolo Lorenzi, the Italian third seed, and fourth-seeded Brazilian Thomaz Bellucci, also made the quarterfinals.

Thiem Out in Sofia Open Shock

In Bulgaria, the Garanti Koza Sofia Open took place on the indoor hard courts of the Arena Armeec. The tournament gets a lot of attention from Australian betting fans because of the strength of its field, boasting 11 Top-50 players in total and three from the Top 15.

However, big names mean big upsets: anyone betting on World No. 87 Nikoloz Basilashvili in the Round of 16 would have made a very tidy sum. The Georgian knocked out the tournament’s top seed, Austrian World No. 8 Dominic Thiem, in straight sets: 6-4, 6-4.

Arena Montpellier also provided Australian tennis punters with some unexpected thrills. World No. 7 Marin Cilic of Croatia was the top seed, and many were expecting him to go all the way. Instead, he crashed out to German World No. 84 Dustin Brown in straight sets on Wednesday, leaving the title wide open.

France’s Richard Gasquet has won the Sud de France Open for the past two years running, and the third seed booked his place in the quarterfinals. So too did French second seed Jo-Wilfried Tsonga, who defeated countryman Pierre-Hugh Herbert in the Round of 16. However it was not to be for Gasquet, as extGenATP star Alexander Zverev took the title in yet another tennis surprise.