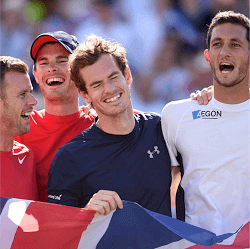 On Saturday and Sunday, World Group and World Group II matches will take place all over the world, with Australia scheduled to play in Kharkiv, north-eastern Ukraine. World No. 22 Samantha Stosur is unavailable for Australia, so Alicia Molik’s team will include World No. 26 Daria Gavrilova instead.

Australians Must Acclimatise to Freezing Weather

Gavrilova, who grew up in Moscow before moving to Australia, may be better equipped to cope with Ukraine’s current minus-15-and-below temperatures than her teammates Casey Dellacqua, Ashleigh Barty and Arina Rodionova. With all four fresh from the scorching heat of the Australian Open, however, even with the courts heated to 18 degrees, they could still struggle to acclimatise.

And don’t forget that the star of the Ukraine team, Elina Svitolina, is currently ranked at World No. 13, and comes to the Fed Cup direct from her singles championship win at the Taiwan Open. If the Australian team does manage to pull off a victory, they will not only progress to April’s play-offs for possible promotion to the 2018 World Group, but they should also reward betting enthusiasts handsomely.

There is lots of other Fed Cup action this weekend, like the major World Group clashes between Czech Republic and Spain, and the USA and Germany. Australian punters should also consider the regional-zone qualifiers, scheduled to climax with promotion play-offs on Saturday and Sunday.

The Fed Cup divides 16 top teams into a World Group and World Group II, and the other 91 competing nations are relegated to three regional zones. Great Britain has struggled to escape the Europe/Africa Zone Group 1, hampered by the fact that they only get one chance per year to do it.

This year, they may pull it off at the qualifiers in Estonia. They’ve beaten Portugal and Latvia, and victory against Turkey on Friday will put them in the weekend’s promotion play-offs. If they win those, they go to the second round of play-offs in April, with a shot at promotion to World Group II.