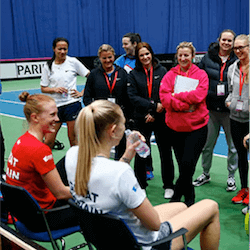 Tennis fans will be looking for more entertainment after the Australian Open, and Australia’s betting community could do worse than consider a punt on the first round of the Fed Cup, scheduled at four locations around the globe on February 11 and 12. The women’s equivalent of the Davis Cup combines national rivalry with top-class tennis, as some of the strongest players in the world compete for their countries.

Punters should keep an eye on the French team, still to be named, in their Round 1 clash with Switzerland in Geneva. Amelie Mauresmo stepped down as captain last year, after revealing that she is expecting a baby, and France’s Davis Cup captain, Yannick Noah, took over the Fed Cup captaincy as well. It’s hardly a role he’s unfamiliar with: Noah first captained the French Fed Cup team in 1997, when they won the title.

One of the players in the 1997 team was Canadian-born, French-American star Mary Pierce. Pierce was also a member of the French team that won the 2003 Fed Cup, so it is fitting that she has now been named as the team’s assistant captain for the 2017 tournament.

Last year, France finished as runners-up to Czech Republic, in a 2-3 loss that stung all the more for being delivered on home soil in Strasbourg. French supporters will be hoping the star pairing in the captaincy can take them all the way in 2017, to secure France’s third Fed Cup title in the tournament’s 55-year history.

Judging by their playing records, the two have the skills and experience to offer the team expert guidance. Noah took 23 major singles titles in a two-decade career, including the 1983 French Open, and finished as runner-up 13 times. In 1984, he and Henri Leconte took the French Open doubles. He played in 11 Davis Cups from 1991-2001, which France won in 1991 and 1994.

Pierce’s record is equally impressive, with 18 major WTA wins. She made it to six Grand Slam singles finals, winning the Australian Open in 1995 and the French Open in 2000; the same year she took the doubles championship with partner Martina Hingis. While 2017 Fed Cup top seeds Czech Republic are sure to remain the punters’ favourites as they defend the title, the French team in such expert hands could certainly prove a threat.