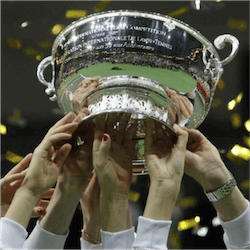 In what is often described as the world’s biggest women’s sporting event, the Fed Cup brings the best of women’s tennis players to the centre court as teams representing their own respective countries compete on a world class level of professional athleticism in the form of tennis. The massive size of the event means that it actually runs throughout the year and takes several months to progress to latter stages.

This means that players and teams can still focus on their own individual campaigns and not have to sacrifice any events to represent their region. 2017 sees some interesting pool matches for the America Zone with countries Bolivia, Canada, Paraguay and Venezuela in Pool A of Group 1 and Argentina, Brazil, Chile, Columbia and Mexico in Pool B of the same group.

Asia and Oceania fall into their own Zone and features just 3 teams in Pool A, Kazakhstan, South Korea and Thailand while Pool B features China, India, Japan and Philippines.

Europe and Africa find themselves in the same Zone for this competition and has 4 Pools. Pool A is Austria, George and Poland while Pool B is Bosnia and Herzegovina, Croatia and Hungary. Pool C features the like of Great Britain, Latvia, Portugal and Turkey while Pool D has Bulgaria, Estonia, Israel and Serbia.

A Bit Of History

While there is a lot of action to cover of the course of the next week or so, it is also quite helpful to look at past winners and gauge how the balance of power has been sitting in this tournament. We see tennis juggernaut team USA sitting atop of the pile with 17 wins and 11 runners-up finishes followed by Czechoslovakia Czech Republic holding firmly with 10 first place finishes and 1 runners-up position. Australia of course features in the top 3 spots with 7 wins and a strong showing with 10 runners-up, which shows the strong heritage of the sport in Aus.

Looking forward now, round one has served up plenty of thrills and spills and there are sure to be more to follow.