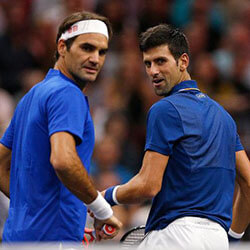 Roger Federer and Novak Djokovic has moved to the quarter finals of the Madrid Open. Federer managed to save two match points before earning a win against Gael Monfils, moving forward to the quarterfinals. The Swiss, who is fourth seeded, returned from a break down during the deciding set to beat the French player 6-0 4-6 7-6 (7-3).

Federer is now set to take on fifth seeded Dominic Thiem for the semi finals, who he lost to in the final match of the Indian Wells. Talking about his latest win, Federer stated that instead of seeing things as rainy and cloudy, he’s starting to see the sunny side, adding that it’s not often that players win a match through match points, but that he’s feeling relief after his match.

World number three Federer needed only 19 minutes to complete his set against Monfils, and dropped four points on his serve. Monfils, who is 18th in the world, rallied for the second set, but ultimately Federer proved stronger in the tiebreak deciding set.

The win is marked as Federer’s 1200th career victory, and has secured his position in a first clay court quarterfinal since he competed in the French Open in 2015. Earlier in the day, world number one Novak Djokovic dominated the court to push past French Jeremy Chardy 6-1 7-6 (7-2).