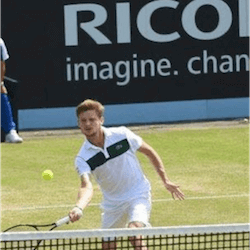 The 2017 Ricoh Open tennis tournament, to give the 28th edition of the Rosmalen Grass Court Championships its official sponsorship title, took place in the Netherlands at Autotron Park in Rosmalen, s’Hertogenbosch, from 12-18 June. It’s a tournament open to men and women, and it forms part of both the ATP World Tour 250 Series and the WTA International Tour.

The women’s singles this year provided plenty of thrills for punters, as not a single seeded player made the final. Top seeded Slovakian Dominika Cibulova was unceremoniously bundled out of the competition in the first round by Germany’s Antonia Lottner, and defending champion and fourth seed, the USA’s Coco Vandeweghe, suffered the same fate against another German, Carina Witthoft.

Tsurenko and fifth-seeded Croatian Ana Konjuh were the only top-ranked players in the women’s singles to reach the semi-finals, where they lost to Estonia’s Anett Kontaveit and Russia’s Natalia Vikhlyantseva, respectively. In the final, Kontaveit needed only two sets to claim her maiden title, beating Vikhlyantseva 6-2, 6-3.

Muller and Karlovic in Oldies Final

The top-rated players in the men’s singles at the Ricoh Open fared better, with only Steve Darcis and Robin Haase, seeded fifth and sixth respectively, knocked out in the first round. Croatian top seed Marin Cilic and Germany’s Alexander Zverev Jr, seeded second, made it safely to the semi-finals.

Karlovic is 38 and Muller is 34, so this year saw the highest combined age in a men’s singles final since 1976. The old-timers didn’t disappoint, however: even though the final only lasted two sets, both went to tie-breaks. Muller won the first of these 7-5, and the second 7-4, to take the title with a score of 7-6, 7-6 overall.