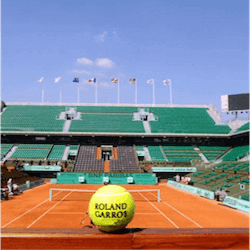 Next Grand Slam the French Open

As the excitement of the Australian Open fades and autumn takes hold on the global south, the focus of Australia’s tennis fans turns to the northern hemisphere and the slow return of spring. Most of Europe is still icy, but happily Paris has three more months to warm up before final qualifiers for the 2017 French Open start at Roland Garros on May 22.

The French Open is the only Grand Slam tournament still played on clay, and the first round proper will start on Sunday, May 28.The clay surface makes play slower and harder, and the men’s tournament consists of five-set matches with no tiebreak in the final set.

As a result, the French Open is seen by many as the most exhausting tournament in all the Grand Slams, if not the world. To profit from the event, punters have to do more than identify the players with the top skills; they also have to find those with the fitness and stamina to outlast the gruelling competition.

We took a look at some likely top seeds in the men’s singles.

Rafael Nadal is the undisputed king of the French Open, with a record nine championships under his belt. Between 2005 and 2014, the only year in which the Spaniard didn’t win the French Open was 2009. His fourth-round defeat to Robin Soderling that year was his first French Open loss ever.

In 2015, Nadal lost the French Open quarter-final to Novak Djokovic, who would finish runner-up to Stan Wawrinka in the final. Djokovic came back to beat Andy Murray in the 2016 final, so he returns as the defending champion.

Thus it’s fitting that Djokovic and Nadal are currently near the top of the 2017 French Open men’s singles betting. The Serbian is being offered at 9-5 and Nadal, who is likely to be top seed if his wrist niggle doesn’t recur, at 11-4.

However, current World No. 1 Murray is also favoured, at 4-1. Stan Wawrinka, at World No. 3 behind Djokovic, could be a contender at Roland Garros too, and he’s at odds of 10-1. And although clay isn’t his favourite surface, after his storming comeback to win the Australian Open, Roger Federer might also be worth a punt, at an attractive 22-1.