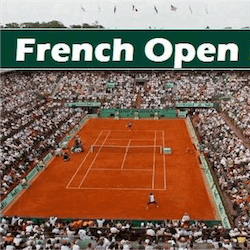 Australia’s online betting community still has three months before the 2017 French Open begins on May 22 in Paris, but many punters are already weighing up their bets for this most gruelling of the Grand Slams.

That fearsome reputation is partly a result of the French Open being the only Grand Slam still played on clay, but it also reflects the five-set men’s matches with no final-set tiebreak, a format that has led to some epic marathons. The tournament proper starts its first round on Sunday, May 28.

The final field has yet to be confirmed, but punters should use the next 12 weeks to consider various players as they rise and fall in the odds.

If Rafael Nadal’s wrist continues to heal, he is likely to be in the top two seeds in the men’s singles. Between 2005 and 2015, the Spaniard lost exactly two matches in the French Open: to Robin Soderling in the fourth round in 2009, and to Novak Djokovic in the 2015 quarter-final. In between, he won nine French Open Championship titles.

So it’s not surprising that Nadal is currently the 11-4 second favourite, although defending 2016 champion Djokovic is just ahead of him at 9-5. World No. 1 Andy Murray can’t be ruled out, at 4-1, and neither can 2015 champion Stan Wawrinka, at 10-1.

Roger Federer is at 22-1; bookies obviously feel his storming return to top form in his Australian Open win does not outweigh his antipathy for clay. Nevertheless, he could surprise them.

Based on her Grand Slam record alone, let alone January’s magnificent Williams Sisters Derby in Melbourne for the Australian Open title, Serena Williams is going to be fancied by a lot of punters for another Roland Garros triumph.

Most betting sites are currently offering around 2-1 on the American. However, she has won the French Open only three times in her record 23 Grand Slams singles, so it’s obviously the tournament she finds the most challenging.

Defending champion Garbine Muguruza, at 9-2, could be a threat, as could 2014 runner-up Simona Halep, at 10-1. Angelique Kerber at 12-1 and Maria Sharapova, back from her drug suspension at 14-1, are also contenders.