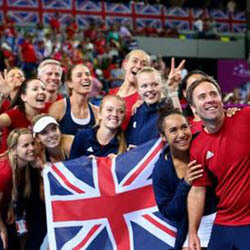 Great Britain will face Slovakia in a qualifying tie for the new Fed Cup finals next year in a game away from home. The team of Anne Keothavong will play the five-match tie in February for a place in the team finals. The finalists, Australia and France, have already qualified so far this year for the April Finals in Budapest, where they will face hosts Hungary and the Czech Republic. The new format means that Great Britain will start a year with a chance to win the trophy for the first time since 1993.

Previously, the award could only be lifted by the eight clubs in the top level of the competition. Twenty teams start the year with the opportunity to win under the new system. Britain had been in the Fed Cup’s third tier for 26 years until they secured World Group promotion by beating Kazakhstan in April in London. In the match next February, British number one Johanna Konta, who is ranked 16th in the globe, is likely going to be the highest rated player. However, she is the only Briton in the top 100 in the world, whereas there are three from Slovakia-Viktoria Kuzmova (54), Dominika Cibulkova (68) and Anna Karolina Schmiedlova (96).

If Britain loses the tie, in the same week as the Finals, they will compete in a play-off round. Victory would offer them another opportunity to achieve the 2021 finals, while failure would return them to the Europe / Africa zone.