Get Ready for the ASB Classic 2017 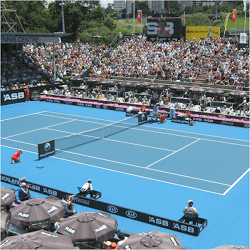 The 2017 ASB Classic Serves Up an Impressive Line Up

Tennis fans can look forward to a sparkling schedule combining tennis; fashion; food and entertainment at the ASB Classic, set to take place next year.

Straight after announcing the strongest player field it has yet to feature, the ASB Classic for 2017 has gone and partnered with the most excellent names in the world of fashion, entertainment and food in order to provide an extraordinary experience off the courts as well.

The country’s most amazing musicians and chefs will be matching the electrifying atmosphere on the courts and deliver first-rate entertainment and cuisine, confirming that the ASB Classic is raising the barre for summer events in 2017.

The Serve will double in size for the event, and, making use of the gorgeous greenery of the Auckland Domain; fans will be able to take part in all of the exciting events through pop-up bars and restaurants; giant screens which will make sure they don’t miss a moment of the action; and bean bags and picnic baskets that will be offered for them to enjoy on the lawns around the music stages.

A Diverse Line-Up of Great Musicians

A varied programme set to feature some of the most electrifying up-and-coming acts as well as more established musicians have confirmed live performances across the two-week period the event is set to take place over, with these including New Zealand’s Breakthrough Artist of the Year, Kings; Laughton Kora; Boh Runga; Isaac Aesili of Latin Aotearoa; the Nathan Haines Band; and Peacekeepers, the Shapeshifter side-project.

Kings stated that he was really excited to form part of such a diverse entertainment line-up, and that he believed that they would help bring the atmosphere of the tournament “to life”.

The Finest Food Around

For the fourth year in a row, the ASB Classic will keep its partnership with the Kitchen, by SKYCITY, going in order to serve up sumptuous satisfactions to savour from the likes of Nic Watt; Sean Connolly; and Peter Gordon. Watt is set to design a specially made menu for the Moёt and Chandon Champagne Lounge, alongside the special treats provided for the players in their lounge on a daily basis, and Connolly will be heading up a pop-up version of his restaurant The Grill. Fans will be able to taste these dishes and others in The Serve entertainment hub; courtside boxes; and throughout the grounds.